Walker was a partner at Accenture for seven years, running the international Marketing Sciences division after the consulting giant bought his firm Edge Consulting in 2002. He grew the practice to more than 20 offices globally, and a team of over 400 consultants, and oversaw the buying and expansion of consultancy Media Audits. 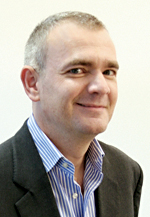 Earlier in his career he held global leadership roles at MindShare and J.Walter Thompson, and served as Chairman of Brand Science.

Nunwood CEO Clare Bruce commented: 'This is a major coup: James is the kind of partner that most agencies only dream of being able to bring on board. With first-rate consulting and global expansion experience, James will play a leading role in the ongoing transformation of Nunwood's consultative approach, client services and international strategy.'

Walker believes Nunwood's profile is 'unlike any consultancy in the marketplace' and comments: 'It's a thrilling place to be and a business with vast, untapped potential that I'm looking forward to helping release as the group rapidly expands into new territories. We have plans for immediate expansion, including Europe, West Coast US and Asia-Pacific.'