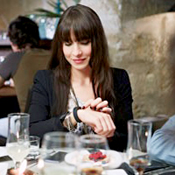 The new device hooks up to the firm's new 'Lifelog' Android app, which logs how much time users have spent running, walking, cycling, driving and sleeping. As well as these movements and physical states, it can also monitor details about the music users have been listening to, how often they interact with specific friends, and the photos they have taken each day.

In addition, the app offers a 'life bookmark', through which users can tag an event or location such as a restaurant where they've enjoyed eating.

As yet Sony has not revealed its specific plans for all this personal information, but hints that it may also be combined with social and entertainment information.