The White House has appointed Dr DJ Patil as the first US Chief Data Scientist, to help 'maximize the nation's return on its investment in data'. 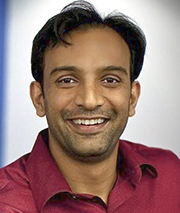 Patil (pictured) joins President Obama's administration after serving as VP of Product at big data start-up RelateIQ. Prior to this he worked for venture capital firm Greylock as Data Scientist in Residence; he was Head of Data Products and Chief Scientist at LinkedIn; and he held senior roles at Skype, PayPal and eBay, and earlier at the Department of Defence.

In his new role, Patil is tasked with providing a vision of how to maximize return on federal data, create nationwide data policies that advance the US position in this field, work with agencies to establish best practices for data management, and recruit data scientists to help address these data science objectives. He will also focus on healthcare data to help improve treatments and control costs.

In a statement, Patil said: 'Given the importance this administration has placed on data, along with the momentum that has been created, now is a unique time to establish a legacy of data supporting the public good. That is why, after a long time in the private sector, I am returning to the federal government as the Deputy Chief Technology Officer for Data Policy and Chief Data Scientist.'