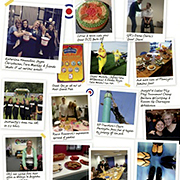 Founded in 1977, the MRBA is funded by donations from across the market research sector, and provides financial help, advice and support to people who are working or have worked in the industry. The charity's annual auction is its most important fundraising event, but this year's new fundraising week was designed to generate more awareness about the organisation's work, especially among younger researchers, while encouraging more companies to support its efforts.

Organisations involved in the new event, which took place from 19th - 23rd October, were invited to nominate an 'MRBA Champion' staff member, to work alongside the association to help plan various fundraising events during the week, and promote the organisation among their colleagues. These events included team quizzes and lucky dips, cake sales, coffee mornings, hosted pot luck breakfast and lunches, sponsored marathon runs. Various individuals also made one-off donations.

MRBA Week was spearheaded by committee member Sue Robson, who comments: 'The help and support we received from the industry was absolutely amazing, but nothing would have happened without the drive, enthusiasm, persistence and persuasion skills of everyone on the organising team. In addition to the money raised which will enable us to help maybe another dozen people this year, it was also about raising the MRBA's profile, particularly amongst the younger generation of researchers who may never have heard of us before. This is important as these are the people who can now recommend us or who may need our help in the future'.