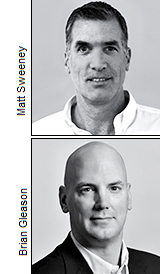 Xaxis was formed in 2011, promising to bring together the global group's ad buying capabilities with a colossal database to offer clients the 'world's largest pool of audience profiles'. The firm now delivers results for more than 2,800 clients in 44 markets across North America, Europe, Asia Pacific, Latin America and the Middle East.

Sweeney most recently served as SVP, Client Engagement, in charge of the Programmic Sales and Account Management team in the US. Before joining, he was VP, Platforms at ad tech firm Crisp Media; CRO at Geeknet; and CEO/President for IDG's Computerworld and InfoWorld. Gleason was previously Group CRO for IDG TechNetwork and Consumer group, and he was responsible for three owned and operated sites in PC World, MacWorld and Techhive.

Commenting on Sweeney's promotion, Gleason said: 'Matt has played a significant role in the rapid growth Xaxis has achieved in the US. His focus on client success and efforts to create true partnerships have driven the growth of the business. I have no doubt that Matt will guide our North America business to new heights'.