German sample and panel provider respondi has promoted Jennifer Roberton to the role of Managing Director, responsible for the UK office and market. The firm has also welcomed four new members to its Board, while founder and CEO Otto Hellwig continues to oversee management of the firm. 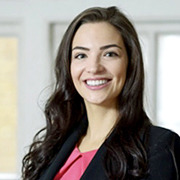 Founded in 2005, respondi provides participants for qual and quant online and mobile surveys through its own online access panels in ten European countries. Roberton (pictured) joined in 2011, with more than a decade's experience gained at companies such as eRewards, Ethnos and The iD Factor. Most recently, she served as respondi's UK Sales Director.

In addition, the company has appointed Orkan Dolay, Jörg Tschasche, Benjamin Simmenauer and François Erner to its Board. Dolay has worked for respondi since 2007, most recently as MD of both the French and UK operations, and is currently COO. After eleven years with the business, latterly as Head of Project Management, Tschasche will now be responsible for production and services. Simmenauer, in his role as Chief Consulting Officer, will oversee the newly created 'Insights and Consulting' division, while Erner, as Chief Innovation Officer, will manage the new 'Research and Development' business. Simmenauer and Erner were previously MDs of French market research firm 'House of Common Knowledge', which was acquired by respondi earlier in the year.

In a statement, respondi said: 'With these measures in place, respondi would like, with its national business, to get closer to its clients and their needs in the future. At the same time, concentrating on the development of new ways and methods of digital research, in order to offer solutions from data collection to data science'.