In a trading statement issued today, GfK said that both sales and adjusted income had fallen in 2016, in part as a result of negative currency effects. 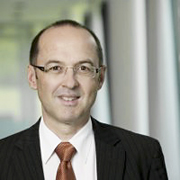 According to preliminary figures, sales were 3.8% down versus the prior year at approximately EUR 1,484m, compared with EUR 1,543.4m the prior year. Currency effects had a negative effect on sales growth of 1.6%, and organic growth was minus 1.7%. Adjusted operating income fell 3.8% to EUR 154m during the year.

The firm's Consumer Choices division posted organic growth of 4.1% in 2016, but GfK said delays in large growth projects in its Audience Measurement business had a negative impact. The Consumer Experiences sector fell by 6.3% year-to-year. By region, the AsiaPac, CEE/META and LatAm regions achieved organic growth, while Southern and Western Europe declined in the first three quarters, and Northern Europe and North America recorded sharp declines in sales.

Gerhard Hausruckinger (pictured), Speaker of the GfK SE Management Board, comments: '2016 was a difficult year for us. We had to post reduced sales in the ad hoc business and are in the process of refocusing key major media projects to achieve long-term success. At the same time, we have strengthened our digital business through targeted acquisitions. We divested less promising activities. This is why we have not achieved our margin targets'.