Researchers at Rotterdam School of Management, Erasmus University (RSM) have been using brain scans to understand the elements in a TV advert that trigger viewers to find the product online. 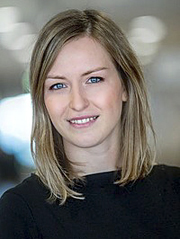 First the researchers undertook a study of a large audience to measure clickthrough rates, and uncover the combination of elements in an ad deemed to be most effective. A group of consumers were then shown eleven different adverts, all created for the same brand of pain-relieving muscle and joint gel. Brain scans using magnetic resonance imaging were then used on this small group, to determine what makes particular elements in an ad effective in activating consumer decisions. According to the team, the scans revealed that an advert works best when it highlights both a product's functional benefits, and triggers the viewer's imagination.

Linda Couwenberg (pictured), who led the research and is also part of the Decision Neuroscience Lab at the Donders Institute for Brain, Cognition and Behaviour, states: 'This study shows that the effectiveness of a marketing message cannot be explained by isolating just one simple brain process. Successful TV adverts trigger a complex combination of processes in the brain'.