Ipsos India has announced that its CEO Amit Adarkar has taken on the additional role of Operations Director, for the Asia Pacific region. 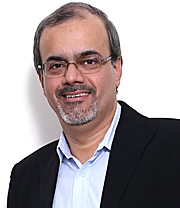 Adarkar (pictured) joined the firm in 2013 as MD of Ipsos InnoQuest, after serving as VP of Nielsen's forecasting and NPD unit Nielsen BASES. Prior to this, he was MD of Market Probe's India & Middle East operations, and before this he worked as Mumbai Brand Head for Synovate. He began his career with IMRB, and later worked for Nielsen companies ORG-MARG and ACNielsen.

In his new dual role, Adarkar reports to Christophe Cambournac, CEO of Asia, Middle East and Africa (AMEA), as well as to Hamish Munro, Ipsos Global CEO Operations and Ipsos Interactive Services (IIS). All operations heads in the Asia Pacific region and the IIS team based in Malaysia, will now report to Adarkar, who is now charged with overseeing standardization across the APAC markets.

Commenting on the move, Adarkar said: 'The market research industry in India is on the cusp and technology (especially mobile) will be the next game changer. And to deliver on client centricity, being nimble and efficient will be at the forefront of client delivery'.