In Australia, Kantar has promoted Leigh Mander and Jacqui Brandt to MD roles, leading the Sydney and Melbourne offices respectively. Meanwhile, Jonathan Sinton has been promoted to the role of Chief Commercial Officer and James Brown moves into the newly created position of National Head of Shopper. 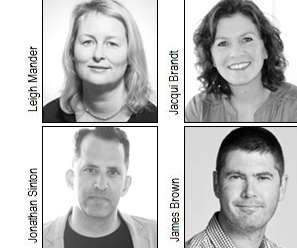 Mander joined the group eleven years ago as a Director of Kantar Millward Brown, and most recently served as Executive Director. Earlier she worked for Marks & Spencer in London as Insights Manager; for De Beers Diamond Jewellers as a Planner; and she was an RE at Motorola. She began her career at Research Surveys in South Africa. Brandt joined Kantar Millward Brown two years ago as an Executive Director, having begun her MR career at TNS in South Africa, and later spent nine years with the company in Australia, latterly as MD, Asia Pacific Clients.

Sinton, former Head of Kantar TNS who returned from the US in January after five years as Global Digital Director, will now help shape the future of the Australian Insights Division. Earlier in his career he worked at Frank N. Magid Associates and then at Research International, where he latterly served as Strategy Director. Brown, who was previously Executive Director, responsible for leading the business in Melbourne, Australia, has more than twenty years' international research experience working across the FMCG, shopper, healthcare and financial services sectors. He previously served as Client Service Director in the Sydney office, where he worked for nearly four years, and prior to this worked for the company in China. Earlier in his career, he was a Research Director at Ipsos China, and Senior Customer Insight Manager at Barclays Bank; and he spent twelve years at Ipsos and Ipsos MORI.

Kantar Australia CEO Jon Foged comments: 'Simplifying our brand strategy is a subtle, but important signal of our evolution and our mission - inspiring organisations by providing the most complete understanding of the people they serve. These key leadership appointments will undoubtedly solidify and strengthen our positioning domestically'.