In the US, retail industry information and intelligence resource EnsembleIQ has promoted Jennifer Litterick to the role of Chief Executive Officer, following the departure of former Kantar exec David Shanker, who had held the role since February last year. 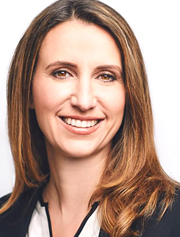 Formed through a merger in 2016, EnsembleIQ is a portfolio company of private equity investor RFE Investment Partners, and works for retailers, consumer goods manufacturers, technology vendors, marketing agencies and retail service providers. Litterick (pictured) was previously EnsembleIQ's Chief Commercial Officer and President for the North American retail vertical. Earlier, she worked for Rogers Media, one of EnsembleIQ's formative acquisitions, as Publisher of Canadian Grocer Magazine, and she later became Group Publisher for the firm's marketing and retail titles. She left the company to serve as a Partner at consulting firm Pinpoint Solutions Group, then returned to EnsembleIQ in 2017, where she became President, Canadian operations.

Litterick replaces Shanker, who previously worked at WPP-owned digital data collection specialist Lightspeed as CEO Americas. Before this, he was CEO of NYC-based digital MR provider PINCHme, Global President of Ipsos Observer, COO of OTX Research (later acquired by Ipsos), and President of Client Solutions at IRI, where he worked for nearly a decade. His next career move has not yet been announced.

Commenting on Litterick's appointment, Board member Mike Foster said: 'Jennifer is a proven leader with extensive media experience, vision, industry knowledge and the ability to bring people together. She is a customer-focused communicator with natural leadership capabilities and a track record of strong execution. Furthermore, she has been on the executive leadership team for the past two years and has successfully grown businesses in both Canada and the US.'