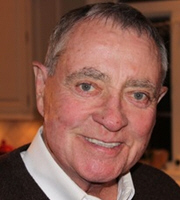 Born in Chicago on October 8th 1932, Churchill (pictured) graduated from Foreman High School, and earned his undergraduate degree from Ripon College in Wisconsin, before serving as a 2nd lieutenant in the army. He then went on to gain an MBA from Indiana University in 1956.

Churchill's first job was in the marketing team at the Parker Pen Company in Janesville, Wisconsin. In 1959, he moved to Chicago-based marketing, research and information firm Market Facts as an Analyst, and by 1984 he had moved up the ranks to the position of President and Chief Executive Officer - he was later named Chairman of the Board. During his 36 years with the company, he was a major part of the team which built the business from a smallish company, to one with $64.6m in sales by the time of his retirement in 1996. He was also past President of the American Marketing Association, Chicago.

Market Facts was acquired by Aegis and in 2002 rebranded as Synovate.

'Verne was a pioneer in the field', says former Market Facts colleague Larry Levin, 'and one of the first to see the benefits of being connected to global research when he forged Market Facts' partnership with South African-based Research Surveys, led by Butch Rice, and brought its Conversion Model analysis to the United States market in the early 1990s. Few people earn iconic status in their industry, but Verne Churchill optimized the word and was, to this day, beloved by all who knew him'.

Former colleague Patricia Toney (nee Thompson) says Churchill, 'our fearless leader', was 'most proud of the integrity, loyalty and shared values' of the Market Facts family of staff, and wrote to her in a 2017 letter: 'I cannot adequately express my gratitude and genuine love for so many people who built such a great company'. 'The adoration was mutual' says Toney. 'Many of us, shamelessly, tried to emulate Verne's most admired qualities: his cadence and eloquence as a writer and speaker, charisma as a business leader, wit, versatility, fashion sense and more. His body of work and memories of the many lives he touched will endure forever'.

Following his retirement, Churchill devoted a great deal of time to painting landscapes and still-life portraits. He was an active member of the Gloria Dei Lutheran Church in Northbrook; an avid golfer and member of Westmoreland Country Club in Wilmette, Illinois; a horse racing enthusiast who frequented Arlington International Racecourse's Turf Club; and a passionate, lifelong fan of the Chicago Bears and Chicago Cubs.