In the US, media company NBCUniversal Telemundo Enterprises has promoted Mónica Gil to the position of EVP, Chief Administrative and Marketing Officer, overseeing operations, growth marketing, and strategy and insights. 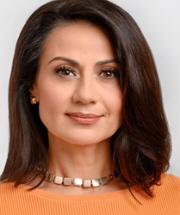 NBCUniversal Telemundo Enterprises, a division of Comcast-owned NBCUniversal, produces and distributes Spanish language content to US Hispanic audiences, as well as audiences around the world. Its entertainment, news and sports content reaches 94% of US Hispanic TV households in 210 markets through 30 local stations, 50 affiliates and its national feed.

Gil (pictured) joined in 2007 as EVP, later adding the title of Chief Marketing Officer. Before this, she spent eleven years at Nielsen; latterly as SVP and General Manager of Multicultural Growth & Strategy, after spells as SVP Public Affairs and Government Relations, and VP, Communications.

In her new role, Gil will continue to oversee corporate communications; corporate affairs; government affairs; corporate social responsibility; and diversity, equity and inclusion efforts, with involvement in the network's long-term strategy and performance management. She reports to recently appointed Chairman Beau Ferrari, who comments: 'Monica's strategic and operational expertise have been instrumental in developing the company's expansion and brand. In her new role, these focus areas will be integral to our company's growth during this transformational time in our business'.