New COO and CFO for Nielsen 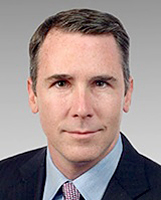 The changes are effective March 10th. West (pictured), a 16-year veteran of General Electric, has been Nielsen's CFO since 2007 and was closely involved in returning it to the public domain. Nielsen says Habib 'will move to the next phase of his career after a transition period, building on his long track record of accomplishments at Nielsen' - but gives no specific details of his intentions.

Recently appointed CEO Mitch Barns says Habib has made 'extraordinary contributions' over the last seven years, and comments: 'The leadership infrastructure he built continuously produces improvements in the speed, quality, and reliability of our products, all resulting in added value for our clients'. Of West, Barns says: 'Our company has never been in a better place, due in large measure to Brian's vision, leadership, and execution over the last seven years' - and of the new role: 'His deep understanding of Nielsen's people, operations, and clients well positions him to drive value in his new role as COO.'

Jackson also joins from General Electric, where he spent nearly ten years in senior finance roles, in divisions including Oil & Gas and Aviation. Before GE, he held financial, controller and planning roles at firms including PepsiCo and The Procter & Gamble Company. He is a CPA and a graduate of the University of Notre Dame. Barns comments: 'Jamere's extensive experience in leading global finance operations and driving profitable growth make him an excellent choice to help drive Nielsen's performance to new heights.'