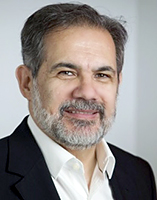 Founded in 1942 by the Montenegro family, IBOPE (The Brazilian Institute of Public Opinion and Statistics) is headquartered in both Sao Paulo and Rio de Janeiro, with offices around the country and in other Latin American states, as well as operations in the US. Back in December, Kantar acquired the majority interest in IBOPE Media, which comprises IBOPE Pesquisa de Midia e Participaçőes, IBOPE Latinoamericana, and IMI.com. At the time, Kantar also bought the remainder of Millward Brown do Brasil and a minority share in IBOPE's political and social subsidiary.

From next month, the companies will integrate their tools, and Kantar IBOPE Media will also invest in new solutions, scalability and technology. Orlando Lopes (pictured), who will report to CEO Andy Brown, will continue to run the company, while joining the Kantar Media Board.

'Our aim is to combine the best of the two companies to offer our customers the most innovative and excellent media research solutions. We consider that the delivery of quality, and always being ahead of new market needs will be the great strength of Kantar IBOPE Media', Lopes said.