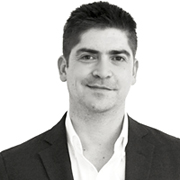 Audience profiling division Xaxis was formed in 2011. The firm now delivers results for more than 2,800 clients in 44 markets across North America, Europe, Asia Pacific, the Middle East, and Latin America. In 2017 it will open offices in Peru, Chile and Uruguay.

Mentasti (pictured) joined the business in 2014 as MD, Latin America, and in this role launched Xaxis operations in Miami, Mexico, Argentina, Brazil, Colombia and Puerto Rico; introduced lookalike modelling capabilities to the market; grew the LatAm team from a single employee to a staff of 40; and doubled revenue each year. He previously served as VP, Regional Digital Director at Starcom MediaVest Group, before which he was Country Manager for Havas Digital in Argentina. Earlier, he held senior roles at Media Planning Group, EHS Brann, DDB, and The Boston Consulting Group.

Global CEO Brian Gleason comments: 'Latin America is one of our fastest growing markets and Lucas has played a key role in establishing Xaxis as the region's most capable and effective partner for audience-based media buying. He has done a superlative job in driving increased adoption of programmatic among the region's largest advertisers and we look forward to his leadership as we continue to grow our footprint and capabilities in Latin America'.