Toluna has added a heatmaps feature to its DIY PowerPack solution, providing a new way to understand how concepts, packaging and images capture consumer attention. 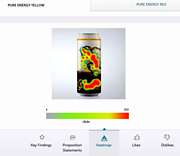 PowerPack was launched last year to help marketers understand the overall strengths and weaknesses of their package concepts. Part of the firm's Automated Insights suite, it offers tools to test branding, product and ad concepts; gather insights on consumer attitudes and purchase behaviour; and compare brand perceptions with those for competitors.

The new 'Heatmaps on PowerPack' feature has been designed to show which areas grab immediate attention and which do and don't appeal to consumers. Respondents are shown a picture and asked about packaging based on the user's packaging concept selections. Results display in real-time on the reporting dashboard. Values are represented as colours, indicating which areas of the stimuli grab immediate attention, and which areas appeal or don't appeal to the audience.