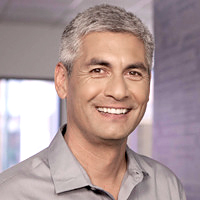 Lucid, which is headquartered in Louisiana and was originally known as Federated Sample, offers a marketing technology suite called Proof, to help advertisers understand their audience; the Fulcrum sample platform; and Reach, a machine learning solution launched last year which gives instant feasibility and pricing on a planned study.

Pittenger (pictured) joins with more than 22 years' software development and service engineering experience and sixteen of management experience. His Internet career began in 1996 as one of the first employees at GeoCities, where he led the engineering organization and helped lead the company to IPO and eventual acquisition by Yahoo!, where he then spent nearly ten years. After spells at Ooyala and Proofpoint, he recently led the Engineering and Product divisions at marketing platform Rocket Fuel.

In his new role, Pittenger takes over from Brett Schnittlich, who becomes company President and broadens his role to include expansion of Lucid's audience and measurement businesses. Commenting on Pittenger's appointment, Schnittlich said: 'Rick's experience in software engineering, alongside his long leadership history, will help Lucid in this period of growth. We're excited that Rick has decided to join us, and we can't wait to see what he brings to the technology team'.