Swiss investment firm Partners Group Holding AG is 'nearing a deal' to acquire consumer data giant IRI from current owners New Mountain Capital for something over $2 billion including debt, according to reports. 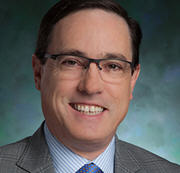 Quoting 'people familiar with the matter', Reuters says an agreement 'could be announced before the end of the month'.

IRI's recent activity includes continued strengthening of its predictive analytics and insights platform LiquidData, and further extension of its large network of data and technology partnerships. Its President and CEO is Andrew Appel (pictured).

Partners Group was founded in 1996, is headquartered in Baar-Zug, Switzerland and has more than $78 billion in assets under management. On this basis, it's about four times the size of New Mountain, which acquired a majority stake in IRI, then known as SymphonyIRI, in 2011.