WPP founder Sir Martin Sorrell is to receive shares worth around £2.1m from the group's executive performance bonus scheme, nearly a year after leaving the company amid claims of possible misuse of company assets and 'personal misconduct'. 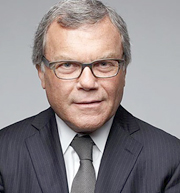 At WPP's AGM held last June, nearly a third of WPP's shareholders rejected the group's remuneration report, which included the Board's decision to give Sorrell (pictured) a long-term share award of up to £20m over the next five years. After a legal consultation, WPP's remuneration committee agreed that there was no reason to withhold Sorrell's bonus, and yesterday it was announced that he is to receive about 250,000 shares worth around £2.1m for WPP's performance between 2014 and 2018. However, Sorrell has already chosen to repay an undisclosed sum (thought to be less than £1m) in disputed expenses.

Sorrell still holds a 1.4% stake in WPP, worth an estimated £150m despite the company's recent downturn.