Chief Executive Bryan Wiener and President Sarah Hofstetter are leaving audience measurement company Comscore due to 'irreconcilable differences over how to execute the company's strategy'. 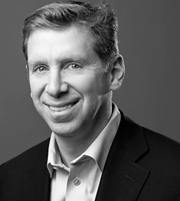 Wiener was originally given a seat on the Comscore Board in September 2017 as part of the firm's settlement agreement with one of its largest shareholders Starboard Value, fending off a lawsuit. His promotion to CEO, replacing retiring co-founder Gian Fulgoni, was announced in April last year. Wiener was Executive Chairman of data-driven ad agency 360i, part of Dentsu, prior to taking up the CEO role. 360i CEO and Chairwoman Hofstetter was brought in in September / October as Comscore President, having worked with Wiener for eighteen years previously.

During Wiener's brief tenure, Comscore appeared to be settling somewhat after a stormy three years - resuming its listing on the Nasdaq stock market in June, after seventeen months' suspension pending investigation of accounting irregularities; and announcing revenue growth of 3.9% to $419.5m in annual results announced a month ago. His departure however comes with a forecast of what appear to be somewhat disappointing results for Q1 of this year - the company estimates revenue in the range $100 to $104m, down from