Australian insights consultancy Fiftyfive5 has expanded its teams in Sydney and Melbourne over the past six months, with the appointment of fourteen new members of staff. 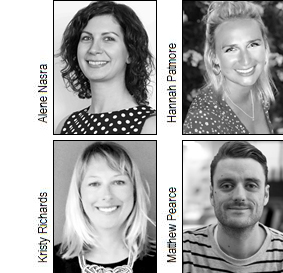 Fiftyfive5 was launched in 2010 by three former Directors of The Leading Edge: Karen Phillips, Mark Sundquist and Darren Kemp. Among the new team in Sydney is former Ipsos/GfK exec Alene Nasra who joins as Senior Program Manager, and former pollinate and KPMG Nunwood exec Hannah Patmore as Senior Account Manager; while in Melbourne, the company has welcomed two new directors: Kristy Richards, who was previously Strategy Director at The Lab Insight & Strategy, and Matthew Pearce, who joins from Clemenger BBDO where he served as Planning Director.

Commenting on the expansion, Sundquist said: 'We continue to invest in people and technology to better deliver to the evolving needs of our clients and to ensure the consumer - or customer - is at the heart of strategy, optimising execution and performance monitoring. With a team of 115 across four offices, we have the scale and capability to deliver to a broader range of our client needs and are focused on continuing to enhance that through on-boarding new people, progressing the current team and an ongoing focus on training and development'.