Salama to Step Down as Kantar CEO

Kantar Chief Executive Eric Salama has decided to step down from his role at some point in 2020, after which he will serve as a non-executive Director and Consultant at the company. Kantar has already begun the process of recruiting a successor. 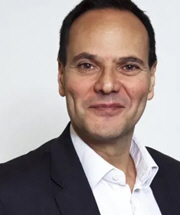 WPP recently sold a 60% stake in Kantar to Bain Capital Private Equity, with total aggregate net proceeds expected to be around $3.1bn, or £2.4bn. Salama (pictured) has worked for the WPP group since 1994, after it acquired consumer consultancy The Henley Centre, where he latterly served as Joint MD. He began his career as a researcher and speechwriter for The Labour Party Foreign Affairs Team in the House of Commons, and started at WPP as Director of Strategy, before joining Kantar in 2003.

In a statement, Salama said that 'as professionally rewarding as 2019 has been', a lot has happened on the personal front, and that the time is now right to pause, reflect on personal priorities and explore other experiences. His resignation follows an incident in January, when he was stabbed by a man attempting to steal his car in Kew, London.

Luca Bassi, an MD at Bain Capital Private Equity, thanked Salama for his leadership of the business throughout the sale process and his commitment to the company. Mark Read, CEO of WPP, added: 'Over the past seventeen years, Eric has built Kantar from its infancy into the world's leading data, insights and consulting company and then worked tirelessly to transition the company to the next phase of its development. We understand his decision and are delighted that he will continue to help and advise the company in his new role'.