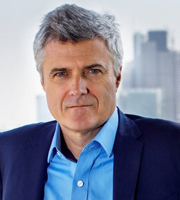 Sorrell, who in 2017 was the UK's highest paid exec, resigned in April after thirty years at the helm, amid claims of 'personal misconduct'. Due to poor company performance last year his last pay packet slumped to just £13.9m.

Read (pictured), former CEO of Wunderman and WPP Digital, and Andrew Scott, WPP Corporate Development Director and COO Europe, were appointed as joint COOs. Read's new WPP contract includes an annual salary of £975k, an annual bonus of up to 250% of salary, a long-term incentive award of 350% of salary (performance measured over a five-year period), a cash allowance of 20% of salary in lieu of pension, and a benefits allowance of £35k. Unlike Sorrell's contract, which did not include a non-compete clause (leading to Sorrell setting up a new investment vehicle called S4 Capital), Read's includes restrictive covenants including an industry non-compete, a non-deal with clients and a non-poach and non-employ of key WPP individuals.

Executive Chairman Roberto Quarta has resumed his role as Non-Executive Chairman, and Scott will continue in his role as COO. Commenting on his appointment, Read said: 'Few organisations have our global reach - 130,000 people delivering results for clients in 112 different countries. Fewer still have our powerful combination of creativity and expertise in technology and data. Our mission now is to release the full potential that exists within the company for the benefit of our clients, to accelerate our transformation and simplify our offering, and to position WPP for stronger growth. To achieve that we need to foster a culture that attracts the best and brightest: inclusive, respectful, collaborative, diverse. What makes our company special is its people, and I am very proud to have been given the chance to build a new WPP with them'.