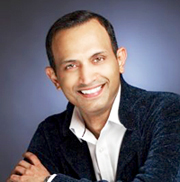 Founded in 2012 and previously known as AdNear, the company is headquartered in Singapore with offices in San Francisco, London, Bangalore, Singapore, Tokyo and Sydney. Its platform currently has a proprietary database of 65 million places which are continuously refined.

The new Allspark tool enables users to identify data points such as places, demographics, interests, and pre-built audience sets, so they can create customer and bespoke audience segments. Each audience is represented by an AudienceCard, which provides real-time insights into their demographics over a period of time. Brands and enterprises can use Allspark to optimise their targeting strategies in real-time, by comparing the digital and 'real-world' interests of the audience.

CEO and founder Anil Mathews (pictured) comments: 'Allspark's state-of-the art technology redefines how brands gather insights about their target audience and interact with them in real-time. Our aim is to ensure that data-driven audience insights are within reach for all, and utilised where they will be most valued'.