After twelve years at marcoms holding company Creston, Barrie Brien has decided to step down from his role as Group CEO, to seek 'new challenges'. The Board will continue to be chaired by former Havas CEO Iain Ferguson. 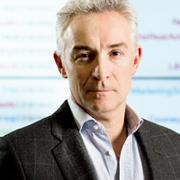 Brien (pictured) joined the group in 2004 as Chief Operating Officer and CFO, and was promoted ten years later, following the retirement of CEO and founder Don Elgie. He then helped establish an umbrella brand called Creston Unlimited, adding the suffix to the names of all its advertising, PR, social media and digital marketing, and research and insight agencies, including ICM and Marketing Sciences.

The group has since been sold to long-term shareholder DBAY Advisors for around £75.8m, and Brien will help with the transition until he departs at the end of April. In a statement, Brien said: 'After the successful sale of the company at an attractive premium for shareholders and agreeing the next phase of the group's journey, I believe now is the right time in my career to seek new challenges. I am confident my colleagues, along with DBAY's support, will build on the success we have achieved to date'.