Reports from several sources suggest that WPP has shortlisted private equity investors Bain Capital, Apollo, Platinum and a fourth undisclosed company to submit bids to buy a majority stake in its insight and analytics arm Kantar. 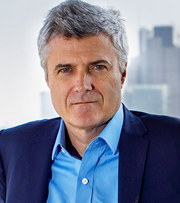 WPP CEO Mark Read (pictured), who took over from founder Sir Martin Sorrell last year, is driving a turnaround strategy which includes a formal process to sell Kantar, home to the agencies formerly known as TNS, Millward Brown and Lightspeed, with WPP retaining a stake in the business. Last October, analysts valued Kantar at between $3 billion and $4 billion, and estimated it might fetch as much as $4.9 billion if sold.

First quarter revenue less pass-through costs in Kantar was flat (up 0.1% like-for-like), while the rest of the marcoms group saw declines, and Kantar cited 'particularly strong growth' in Asia Pacific, LatAm and the Middle East during the period. Reuters says WPP wants to finalise the sale of Kantar in late June.