Marcoms giant WPP has reported a 1.6% increase in H1 revenue to £7.62bn in its interim results, but after allowing allowing for currency effects revenue was flat. 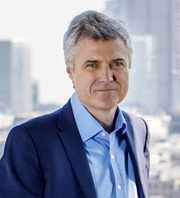 WPP CEO Mark Read (pictured) is currently driving a three-year turnaround plan, and in March, he announced a formal process to sell Kantar - home to the agencies formerly known as TNS, Millward Brown and Lightspeed - with WPP retaining a stake in the business. In July, WPP agreed to sell 60% of Kantar to private equity firm Bain Capital, and Read says that when the Kantar transaction completes, WPP's disposal programme will have generated proceeds of c.£3.6bn.

During H1, average net debt dropped by £709m in constant currency terms to £4.38bn as a result of this disposal programme, which has seen 44 businesses sold off during the past fifteen months.

Using the group's key sales measure - organic revenue less pass-through costs - second quarter revenue fell 1.4%, compared with -2.8% in the first quarter of the year. Reported profits before tax plunged by 44% in the first six months, primarily because of a £117m 'exceptional gain' in 2018 and a one off charge this year. First half Headline EBITDA was down 7.7% to £875m, or a fall of 8.9% in constant currency terms.

Read comments: 'We are still in the early stages of our three-year turnaround plan, and we remain focused on returning the company to sustainable growth over that period. We continue to simplify WPP, with a more integrated offer for our clients, better, more collaborative working environments for our people, and less complicated management structures.'