Ipsos has named a new management team in Asia Pacific, led by Lifeng Liu who was formerly CEO of Greater China. 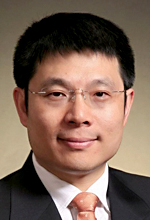 Liu (pictured), who has held senior roles at Ipsos since 2003, previously worked as President at Feng & Associates Marketing Services, as General Manager of China-Guide Marketing Research, and as Department Manager at All China Marketing Research. He began his research career as an exec with the China Statistic Information and Consulting Center.

In his new role as CEO of Asia Pacific, Liu also becomes a member of the Executive Committee of Ipsos' Management Board, reporting to co-Chairman Didier Truchot.

Former Asia Pacific CEO Henri Wallard, who remains a Deputy CEO of Ipsos, will now focus on his existing role as Chairman of Ipsos Loyalty, and on leading Ipsos Public Affairs and Ipsos MediaCT. He joined the group in 2002, having previously spent eight years at Sofres and then on the Board of the merged TNS.