Harris Interactive has appointed Nathalie Perrio-Combeaux and Patrick Van Bloeme as co-CEOs of its UK operations, replacing Robert Salvoni whose position as President, International has been eliminated as part of a 'shake-up' of the UK business. 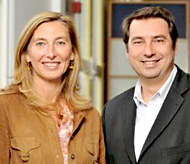 In an investor call last night, CEO Kimberly Till explained that the UK business has shown negative trends in both revenues and profits for the past four years, and the loss of a multi-million dollar tracking study in October resulted in the firm having to eliminate 15 posts in its UK operations.

The contract was lost as a result of the client making 'significant personnel changes', and merging seven trackers into one.

Accordingly, Harris Interactive's UK takings have dropped 44% in the second fiscal quarter of 2011 (the three months ending 31 December 2010). The loss of the tracking study, with a $4m negative impact on Q2 booking and a $3.9m negative impact on revenue, is the primary factor.

'Although we have more work to do in the UK, having lost a large tracking study during the quarter, we are beginning to execute on our plan to reposition the business and get it back on track over the next few quarters,' Till commented last night.

From 1 February, Perrio-Combeaux and Van Bloeme will manage the UK operations alongside their existing roles as co-CEO's of the French operations, based in Paris. They are the co-founders of online specialist Novatris, which they set up in 1995 and sold to Harris Interactive in 2004.

Salvoni - who will be leaving in a week's time, 'to pursue other career opportunities' - joined the firm in 2009 as UK and European Managing Director, and most recently has been responsible for all business outside the US. At this point, his next career move is not known.

Following his departure, Till will oversee the Canada, Europe and Asia businesses, together with the management teams in each of these geographies.