Publicis and WPP to Bid for Aegis?

According to reports in the UK press, Publicis and WPP are both planning to make bids for the remainder of marcoms group Aegis, once it has completed the sale of its market research arm Synovate. 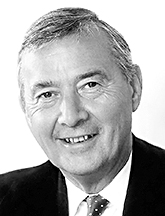 Back in June, the Aegis Board - led by Chairman John Napier (pictured) - confirmed it was planning to sell Synovate to Ipsos in an 'exclusive' deal worth around £500k. Following a rival bid from Doughty Hanson - which owns the Vue cinema chain - it is rumoured that Ipsos has now upped its offer to £600m.

At the time of the announcement, both Publicis and WPP dismissed speculation that they might be considering a bid for Synovate.

Now the Daily Mail has reported that Publicis is preparing a £2.57 billion offer for Aegis, once the Synovate deal has been concluded, while analysts are speculating that WPP is also planning to make an offer.

Separately, Aegis' main investor, Havas Group Chairman Vincent Bollore has indicated willingness to sell his 26.5% stake in the firm. Back in 2006, Publicis and WPP held separate talks with Bollore about partnering to buy the rest of Aegis, but the talks ended without a deal.