Synovate has reported an 8.4% rise in revenue to £269.7m for the first half of the year, ahead of its forthcoming sale to Ipsos for an agreed £525m. Organic gross revenue growth was 6.6% and operating profit rose 14.9% to £5.4m despite a ten percent rise in headcount. 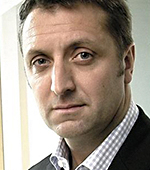 The sale, approved last month, is expected to complete on or around 30 September 2011. Aegis CEO Jerry Buhlmann (pictured) comments: 'Our investors have approved the sale of Synovate, our market research business, representing the largest structural change in the history of Aegis. Once the sale is completed, Aegis will become a more focused group, with the opportunity to accelerate further the delivery of sustainable, profitable growth, and increased financial flexibility to make targeted acquisitions.'

During the first six months of the year, Synovate produced 'solid results', with sales increasing 4.4%, and organic gross revenue increasing 6.6%, while net revenue was up 6.5% to £162.9m.

Across the regions, Synovate EMEA saw gross revenue rise 1.4% to £108.1m, with good performances in Germany, Italy, France and the Netherlands. However, market conditions impacted the business in Spain and Greece. In the UK, where the firm said the market remained 'difficult', good progress was made in improving performance.

In Russia, the Middle East and North Africa, Synovate performed well, particularly in Saudi Arabia and the United Arab Emirates. In addition, good performances were noted in South Africa and Kenya.

The Americas reported a revenue increase of 12.9% to £81.2m, with the North American business seeing an improving sales trend through the period, and strong performances reported in Mexico, Argentina and Chile.

Revenue was up 14.4%% in Asia Pacific to £80.4m, with Greater China, India and Indonesia reporting the strongest figures across the region.

With regard to the sectors it serves, Synovate noted a 'softening' in research spend from some clients in the FMCG sector, who had reduced expenditure or deferred it until the second half of the year. The healthcare business performed well, while automotive continued to show strong signs of recovery, supported by increased spend by a number of Asian and European manufacturers.