The UK's Market Research Society (MRS) has appointed client side marketer Jane Frost, CBE in the new role of Chief Executive. She joins from HM Revenue & Customs where she spent five years. 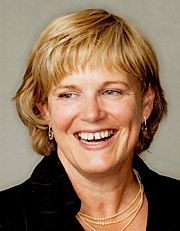 At HMRC, Frost developed and led the individual customer function and the behavioural evidence and insight unit. Before this, she held senior roles in both public and private sector organisations including Shell, Unilever, the Department of Constitutional Affairs and the BBC. During a five-year stint at the BBC her achievements included development of the 'Perfect Day' campaign, which won an award as advertisement of the year and raised £2.5m for Children in Need. She received her CBE in the New Year's Honours list.

Previously the Society has employed a Director General - the last of these, David Barr, retired in September after fourteen years of service. MRS explained the new appointment as 'a signal of intent to reach out more proactively to the business, finance, marketing, public and policy-making communities and highlight the bottom-line benefit research brings'.

Taking up the role on 28th November, she will work closely with COO Debrah Harding and alongside Chairman Vanella Jackson, who comments: 'Jane is an outstanding candidate who, we all feel, brings great tenacity and vision to the role.'