Japanese ad giant Dentsu has made an offer to acquire UK-based media buying and marcoms group Aegis in a £3.16 billion deal, which includes the latter's Aztec retail information and scan-data business. The acquisition is subject to Aegis shareholder approval. 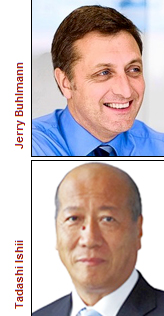 Under the terms of the Dentsu offer, Aegis shareholders will be entitled to receive £2.40 in cash for each Aegis share held. The firm's largest shareholder, French financier Vincent Bolloré - who previously made a number of acrimonious attempts to win seats on the Aegis Board - has already committed to sell a 20% stake to Dentsu and to divest the remainder when the deal completes. The sale will make him around £743.8m.

Founded in 1901, Dentsu's services include media buying and planning across traditional, digital and interactive media, as well as creative production and marketing services. Headquartered in Tokyo, it has more than 21,000 employees in 29 countries, while London-based Aegis employs over 12,000 staff in 80 countries.

The firms say the acquisition will create a 'new global communications network for the digital age', which will extend Dentsu's presence in Asia, Australia, Europe and North America.

Aegis CEO Jerry Buhlmann - who last year told the Wall Street Journal: 'This business is not for sale… unless someone comes in at a very, very high price' - said today in a statement: 'This is a compelling combination of two great businesses that will create one of the world's most dynamic marketing services groups.'

According to reports, Buhlmann, who has agreed to stay with the group until at least the end of next year, will net £1.28m from the sale of his 532,705 shares.

Dentsu President and CEO Tadashi Ishii adds: 'Jerry and I have huge ambitions for a truly client-focused global communications network built in the digital age.'

The offer needs 75% shareholder approval in the vote, which will take place on 16 August. Analysts say that while other bidders - such as Publicis and Omnicom - could emerge, they believe that Dentsu and Aegis are too committed to the deal for it to collapse.