Gayle Fuguitt, formerly research chief at grocer General Mills, has emerged from a short retirement to take the post of President and CEO at US-based advertising research organisation the ARF. 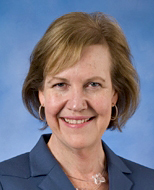 The announcement was made as the association's Re:think conference began in New York today. Fuguitt will succeed Bob Barocci, who announced his intention to retire in December, after ten years in the post. At the time, the ARF Board said it expected the incoming President to 'craft a bold agenda and set an aggressive pace toward defining the future for the ARF and for the industry'.

Although Barocci formally remains in the role until April 15th, Fuguitt - who will oversee a 2013 budget of $9.4m and the organization's team of 35 - will start preparing for her tenure immediately. She spent thirty-two years at General Mills studying consumers, advertising and media, and stepped down a little under a year ago.

In an interview with www.mediapost.com , Fuguitt said an important part of her work would be to explore 'what inspires great creative', suggesting that the rise of ROI measures, 'though vital in itself, has dragged too much attention away from this end of the advertising process. 'There's kind of an inspiration gap. We need to figure out ways of coming up with better ... more engaging creative. We're all focused on metrics, but if the creative doesn't work, then the metrics don't matter.'