Tuesday's lunchtime keynote speaker Simon Rogers is Editor of the Guardian newspaper's online data resource, and he and his team generate editorial through a combination of raw numbers and the insight journalists bring to it. DRNO's News Editor Mel Crowther watched with her pen poised. 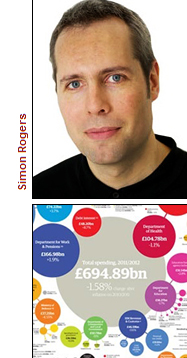 In this session, Rogers described his team's work using big data sets to deliver news stories, insights and infographics - in fact, all sorts of ways of interpreting the world around us without necessarily looking at traditional ways of reporting.

In recent years, he has been involved in the Guardian's exercise to crowdsource 450,000 MP expenses records, as well as coverage of the Afghanistan and Iraq Wikileaks war logs.

The Datablog on the paper's web site offers a raft of information with topics ranging from deficit information going back to the 1940s, to one of Rogers' key annual projects - collating Government spending by department and illustrating it in a complex graphic (see below). For the year 2011-12, Rogers demonstrated that the schematic highlights big drops in spending in more than 40 government departments and quangos, including 'protected' areas such as health and education.

In another example, Rogers said his team had used data to counter PM David Cameron's claim that the 2011 summer riots were not the result of poverty. By collecting arrest and court records containing the addresses of those accused of crimes committed during the disturbances, and mapping this data against the UK poverty indicators of where those people lived and if the locations where the riots took place, the team showed that most people involved came from poor areas. Additionally, working with a transport mapping company, the team could show the routes people had taken from their home addresses to those where they were when arrested.

Rogers said that the trick when embarking on a project of this scale is to start by moving from a big data set to a small data set and then thinking about what could come from it.

'Information is the key thing,' Rogers said. 'It's important to keep it simple to allow the truth to catch up, while also making complicated data easy to understand so that people actually care about it.'