WPP Chief Exec Sir Martin Sorrell, whose marcoms group would no longer be the world's largest if the planned Publicis-Omnicom merger goes ahead, has told analysts he believes there is a '30% to 50% chance' the merger process will collapse. 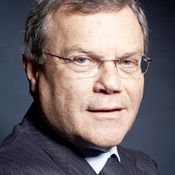 The merger, first announced last summer, would form a company with a combined staff of 130,000 and a market value of c.$35 billion.

In a recent conference call, Sorrell (pictured) said that WPP had experienced a surge in new business as a result of the 'disruption' caused by the Publicis-Omnicom tie-up, including winning the Vodafone, Marks & Spencer, and Comparethemarket.com accounts.

Sorrell said he believed it 'unlikely' that the merger would be completed, citing recent statements from Publicis and Omnicom which acknowledged the possibility that the deal could collapse if certain 'tax-related approvals' were not permitted in France and the UK.

Speaking to analysts in the recent call, Sorrell said: 'The atmosphere in Europe has tightened regarding tax avoidance. To get the concessions the merger partners are looking for, they will have to move material parts of the organizations to the Netherlands or the UK, perhaps including having the CEO and CFO of the new company relocate to those locales.I think the tax authorities will want to see material changes in the structure of the businesses in order to justify the tax approvals.'

Sorrell added his belief that the Publicis and Omnicom statements 'disguised' certain issues, such as how the firms' media operations would be organised and who would run them post-merger.