Nielsen has promoted John Lewis to the role of Global President, in charge of its worldwide business in the FMCG vertical. Company veteran Karen Fichuk replaces him as President, North America. 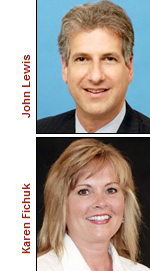 Lewis was previously responsible for leading Nielsen's Watch and Buy growth strategy in Latin America, while also managing the business performance and strategic direction of the Nielsen Buy category in the US and Canada. From 2006 to 2013, he led the firm's North America Buy business, prior to which he was EVP, Marketing, ACNielsen USA. Earlier, he was one of the first employees of The NutraSweet Company, where he held a number of executive positions including General Manager of the Consumer Products Division and CMO.

His previous role has been taken by Fichuk, who has been with Nielsen for more than twenty years, and who most recently served as the North American Commercial 'Go-to-Market' Leader, charged with introducing new service models to address CPG client needs. She has also led the North American Retail business and served as Global Client Leader for Kraft and Mondelçz.

Commenting on her appointment, Lewis said: 'During her time with Nielsen, Karen has gained broad experience across our extensive retailing and manufacturing client base. I have tremendous confidence in her ability to move the business forward with her commitment to analytics and big data outcomes.'