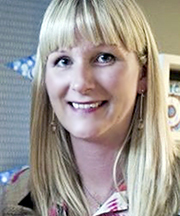 Putnam (pictured) joins with nearly two decades' experience in brand, research, media, advertising and branded content. Most recently, she worked for publishing company John Brown Media as Head of Strategy and Insight, before which she was Head of Insight at Manning Gottlieb OMD, where she created the first MGOMD insight department. Earlier, she served as a senior researcher at The Oxford Research Agency (TORA - now part of SPA Future Thinking).

In her new role, Putnam will lead the Guardian's twenty-strong Audience Insight team, to help the publisher understand the changing needs of its readers across print, digital and social media platforms. She will also work closely with the Data Science team to develop audience understanding for editorial and commercial stakeholders. Putnam replaces Andre McGarrigle, who left the group last year to set up insight consultancy Consumerology.


Sudhakar will join the newspaper in January, having previously held similar roles at ITV, Virgin Media, Telegraph Media Group and lastminute.com. Both will report to Marketing Director Tim Hunt, who comments: 'I'm so excited to welcome Charlotte and Sonia to the team; their customer data and insight will be a huge asset to us going forward. Working closely with our brilliant brand marketing team, ably led by Richard Furness, Charlotte and Sonia will bring the experience, talent and vision to engage and grow our audiences faster, on a global scale.'

Yesterday it was announced that Guardian Media Group had won the Market Research Society's Best In-house Team Award, for the number of research projects it undertakes each year, and for being able to demonstrate 'impressive commercial returns' on investment, described by the judges as 'the Holy Grail in research'.