According to the Market Research Society's latest Annual League Table, the UK MR industry grew 2.5% in the past year. The society says this demonstrates that the research industry is now recovering from the impacts of the recession.

The UK has the world's second largest research and insight industry, and in 2013 the 86 organisations featured in the League Table collectively generated more than £2.455 billion in turnover. To be eligible for inclusion, organisations must have a turnover of £3m. Data collection / panel businesses were included in the study for the first time. 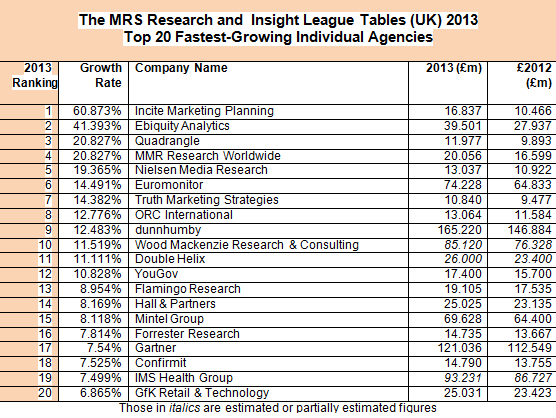 Alongside the year's table, MRS has released a new listing that ranks the 'Top 50 Individual Agencies by Turnover', which breaks out those organisations that are part of a group into their individual businesses. As part of this new ranking, the 20 fastest-growing agencies by organic growth, acquisition, or both, are also included in a separate table, extracted from the growth rates in the individual table.

MRS CEO Jane Frost comments: 'It is very encouraging to see that the research industry is showing renewed strength and tangible growth. It has been a tough few years and it is testament to the resilience of the industry that there have been no departures from the table over the past year.'

Full tables are on the MRS web site at: www.mrs.org.uk/leaguetable .