Quarta Given Chairman's Role at WPP

WPP has appointed Smith & Nephew Chairman Roberto Quarta as a non-executive Director and Chairman-designate, succeeding Philip Lader. He will join the Board on 1st January 2015 and offer himself for re-election at the group's AGM in June. 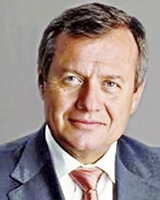 Lader joined the Board as Chairman in 2001, and announced his plans to step down last April. He will continue in the role until Quarta steps down as Chairman of IMI.

WPP CEO Sir Martin Sorrell comments: 'Following an exhaustive search, the Board has chosen Roberto to be its next Chairman, as his experience and background complement and will help develop WPP's strategy in new markets, in new media, in data investment management and the application of technology and, last but not least, horizontality.'