Marcoms giant Dentsu Aegis Network has acquired a majority stake in India's social and digital media agency WATConsult. Terms of the deal have not been disclosed. 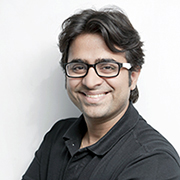 Founded in 2007, WATConsult offers a range of social media marketing and digital video production services through a team of more than 160 staff based in Mumbai, Delhi, Bangalore and Kolkata. In addition, the company has an in-house analytics capability, offering dashboards and tools for social and digital media. Led by founder and CEO Rajiv Dingra (pictured), the firm will become part of Dentsu Aegis Network's digital marketing agency Isobar, and will be known by the snappy title of 'WATConsult - Linked by Isobar'.

Dingra will report to Ashish Bhasin, Chairman and CEO of Dentsu Aegis Network South Asia, and will also join the group's Digital Council in India, alongside the CEO's of Isobar, iProspect and WebChutney.

Commenting on the acquisition, Dingra said: 'We are confident that by becoming a part of a digital focused network like Dentsu Aegis Network we will gain a competitive advantage in the fast consolidating Indian market. As an agency we see huge growth opportunity in digital advertising, particularly social media, digital video and mobile, and we are geared to capitalising on it.'