In the UK, the Market Research Society (MRS) has elected Crispin Beale, CEO of Chime Insight and Engagement, and Danny Russell, UK General Manager of Business Intelligence at Telefonica, as its new joint Chairmen, replacing Richard Silman who took on the role last April. 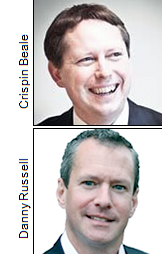 Beale has more than twenty years' research expertise and has been an MRS board member for nine years. He is currently the UK's ESOMAR representative, and previously led the research teams at Dixons Stores Group, BT, Royal Mail and the Post Office.

During his career, Russell has held key research roles at Boots, Kraft, BA, BSkyB and Paddy Power, and he currently leads the UK Business Intelligence team at Telefonica (O2). He is also a past Chairman of AURA (the UK's Association of Users of Research Agencies).

In a statement, the MRS said: 'After assessing prospective candidates, the MRS elected Beale and Russell on the basis of their comprehensive and effective strategy to take the world's leading research and insight authority forward in these challenging times for the industry.'