SurveyMonkey CEO Dave Goldberg died on Friday whilst on holiday in Mexico with his family, apparently as a result of an accident in the gym. He was 47. 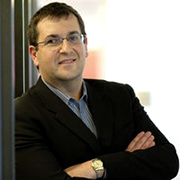 Goldberg, the husband of Facebook COO Sheryl Sandberg, was found by his brother Robert lying next to a treadmill on Friday and appeared to have slipped and cracked his head open. Mexican authorities said Goldberg still had vital signs when he was discovered, but died later in hospital as a result of severe head trauma. There are no plans for a criminal investigation.

Goldberg grew up in Minneapolis, earned a degree in history and government from Harvard University in 1989, and worked as a consultant at Bain & Company before following his passion for music and moving to Capitol Records as Director of Marketing Strategy and New Business Development. In 1994, he and a high school friend started Launch Media, a digital music magazine at first distributed by CD-ROM. Launch was sold to Yahoo! in 2001 and Goldberg became Vice President and General Manager of Yahoo Music, based in LA and helping to build it into the Internet's most-visited music destination. From 2007 he was 'Entrepreneur in Residence' with Benchmark Capital, evaluating investment opportunities and advising portfolio companies.

He met his future wife Sheryl Sandberg in Los Angeles in the summer of 1996, when she was working at consulting firm McKinsey, but they were no more than friends until 2001, when she moved to San Francisco to work at Google. After selling to Yahoo! Goldberg had to stay in LA and commuted to San Francisco for four years, until with their children in mind he moved jobs and location. Sandberg, COO of Facebook since 2008 and arguably the highest profile female exec among the Silicon Valley giants, has said in her book Lean In and often in public that her husband's support has been a key to her successful combination of career and family, stating in 2011: 'The most important career choice you'll make is who you marry. I have an awesome husband, and we're 50/50'. Goldberg also gave vocal support to his wife's promotion of equal pay and treatment for women in the workplace.

He became CEO of DIY online survey firm SurveyMonkey in 2009, a time when despite its high profile in the industry it had only a dozen employees. It now has 450 and is valued at around $2 billion, frequently attracting substantial investments which Goldberg told DRNO in an interview last November had never been used to fund the company's growth - its own profits have always been sufficient to keep it expanding strongly - but to help reward shareholders and staff.

In a statement on its web site on Saturday (www.surveymonkey.com/mp/dave-goldberg-statement-surveymonkey ) SurveyMonkey said: 'We are deeply saddened to announce that Dave Goldberg passed away suddenly last night. Dave's genius, courage and leadership were overshadowed only by his compassion, friendship and heart. His greatest love was for his family. Our sympathy goes out to them and to all who were touched by this extraordinary man. We are all heartbroken'.

Other tributes have been pouring in from family, friends and associates. Facebook CEO Mark Zuckerberg said in a post 'Dave Goldberg was an amazing person and I am glad I got to know him'. Ric Fulop, a General Partner at North Bridge Venture Partners, wrote on Goldberg's Facebook page 'He spent so much time helping me asking for nothing in return. The world needs more people like Dave.' Disney ABC Television exec Karin Gilford, who worked with him at Yahoo! and previously, commented: 'To this day, he is the leader and person by which I measure all others'.

At the time of his death, Goldberg was also on the Board of Directors at FilmTrack, Graham Holdings Co. (formerly The Washington Post Co.) and the non-profit New Schools Venture Fund.

The family is planning an invitation-only celebration of his life on Tuesday at Stanford Memorial Auditorium. Male attendees are urged not to wear ties, 'in keeping with Dave's lifelong hatred of ties' - and the invite also requests no pictures are taken and no posts made to social media. The Walt Disney Company is moving its second-quarter earnings release today to allow execs to attend the funeral. In addition to his wife and two children, Goldberg is survived by his mother, Paula, who runs the nonprofit Pacer Center for children with disabilities - contributions to the Center are invited.


DRNO's Nick Thomas writes: 'I was shocked and saddened to hear of the death of Dave Goldberg, whom I visited and interviewed in November last year. He and his entourage were incredibly welcoming and friendly towards the editor of a small-time publication, and happily took an hour out of his busy schedule to discuss everything from US political polling to the threat to the market from Google Surveys - or lack of it, in his opinion - I continually asked him who or what he might see as SurveyMonkey's competition but he really couldn't or didn't want to think of anyone or anything.

'I can see why SurveyMonkey bloomed under his leadership - his style was energetic, enthusiastic and unapologetic, responding to quotes from the industry about the effect of DIY research on survey quality and reliability without breaking stride or losing his smile for a second. I imagined this to be the result of having heard the questions before and knowing his answers in his sleep, but also to a very genuine belief in his company as a force for good in the industry and in the world as a whole. I was surprised when I watched the video back afterwards that my planned tough questions had sounded reasonably tough after all - immediately after the interview I'd had the feeling I must have bottled it, because he'd seemed to have such fun answering them. For what it's worth, I didn't get the impression there was a cloud of any kind on Dave Goldberg's horizon: I imagine he made a great husband and father, and my heart goes out to his family and friends at this incredibly sad time.'