Women's non-profit MR networking group WIRe has launched an initiative which aims to increase the number of female speakers at industry conferences and events. 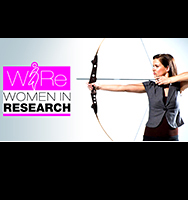 Founded in 2007 by former Decipher CMO Kristin Luck, WIRe (Women in Research) provides a global networking group for women in all parts of the industry, and also helps facilitate leadership, entrepreneurship, mentoring and other career development goals.

The new '50/50 Initiative' aims to support women from across the broader research landscape, by matching them with the industry's best events. Its team will work closely with conference organizers to promote a 50/50 gender split on stage. An online registration form hosted on the womeninresearch.com web site will be used to build a directory of those women working in the sector who are interested in speaking at conferences, appearing on discussion panels or webinars, contributing to articles and other thought leadership opportunities.

Lenny Murphy, Editor in Chief of Greenbook and founder of the IIEX event series, commented: 'I'm thrilled that WIRe is taking an active role in not only illuminating the lack of gender balance onstage at many industry events, but also giving event organizers like myself the resources to identify female thought leaders in the global insights community'.