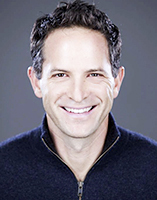 Goldberg died in an accident in the gym, while on holiday in Mexico with his family. Later that month, Board Director Lurie was named as temporary Executive Chairman while the Board conducted a search for a new CEO, and Veghte took up that position in August. While no reason has been given for Veghte's decision to step down from the post, he will continue to serve on SurveyMonkey's Board of Directors. Current Board member David Ebersman will become Chairman.

Lurie (pictured) was previously SVP at camcorder manufacturer GoPro, before which he held senior roles at Guggenheim Digital Media, CBS, CNET Networks and JPMorgan. He also co-founded children's charity CoachArts, and he has served on the SurveyMonkey Board since 2009.

Board Member Ben Spero comments: 'SurveyMonkey has long benefited from Zander's presence on the Board, and we are thrilled for him to become CEO. We are confident that his vision, leadership and experience at transformative companies will help SurveyMonkey extend its leading position in the market. We also sincerely thank Bill for his contributions to the company and look forward to working with him on the board. He played an important role during a critical time in the companys history'.