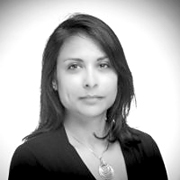 After a brief stint at the ONS in the 1990s, Earle spent more than eighteen years at GfK, account managing Google and Vodafone UK before a promotion to Digital Research Strategy Director in 2010. After five years she was promoted to UK Head of Client Development, leading a senior team of 25 directors and client development executives.

ZappiStore says Earle's 'optimistic perspective on the future of research syncs perfectly' with its own, while Earle says her new employer is 'the first tech company of its kind in the industry' and enthuses: 'We want to ensure MR stays relevant and impactful for brands, finding new ways to involve and understand consumers'.

CEO Steve Phillips says of the appointment: 'As a forward-thinking company, it is important we bring aboard thought-leaders as passionate as Babita. We are excited for her to join our team and help our business partners and clients get the most out of automation'.