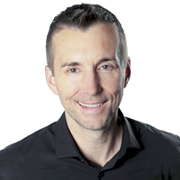 Qualtrics, which was founded in 2002, has US offices in Utah, Seattle, Washington DC, and Dallas; as well as operations in Sydney and Canberra in Australia; and in Dublin and London. Serafin (pictured) joins after seventeen years at Microsoft, where most recently he was Corporate VP with responsibility for Office 365 Skype for Business. During his time at the company, Serafin also helped spearhead the development of its artificial intelligence platform and personal assistant Cortana, and as General Manager of Microsoft's Tellme Networks.

Serafin will relocate from Washington to Utah to take up his new role. Acting COO and co-founder Jared Smith comments: 'This has been a very long and selective search and we've found the perfect partner in Zig. Qualtrics is passing 1,200 employees, expanding product lines, and has started IPO planning. Zig is a phenomenal operator and will bring considerable experience leading cross-functional teams on a global scale - we couldn't be happier about having him join our team'.