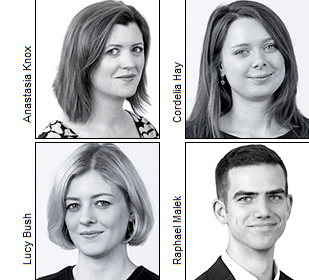 Launched in 2010 by Opinion Leader co-founders Deborah Mattinson and Viki Cooke and their former colleague Ben Shimshon, BritainThinks offers strategic advice for political, corporate and not-for-profit clients, while its WorldThinks international division has a specific focus on reputation research.

Knox came to 2013 as Research Lead, having previously worked at Ipsos MORI as an SRE in the Social Research Institute; Hay also joined three years ago, after serving as a SRA at ComRes; Bush previously worked at Define and joined BritainThinks in 2014, and now leads the firm's work with vulnerable audiences; and Malek joined in 2012 through the internship programme, and has since worked with a wide range of organisations across private, public and third sectors.

Commenting on the news, Mattinson said: 'Anastasia, Cordelia, Lucy and Raph thoroughly deserve these promotions and will be a great asset to our senior team at BritainThinks'.