London and Leeds-based Trinity McQueen has announced year-on-year growth of around ten percent, with sales up to £4.92m in the 12 months ending September 2016. 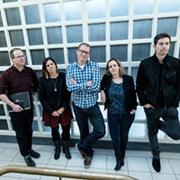 The agency got its new name in 2014 following the beginning of an MBO by its Joint MDs Anna Cliffe and Robin Horsfield, thus moving away from its former parent firm, marcoms agency Brass. The MBO was completed last October. The firm employs more than 40 people in its London and Leeds offices and initially specialised in retail, grocery and FMCG: it is now growing strongly in media, telecoms, utilities and financial services.

The last year has seen the opening of new, larger premises in Clerkenwell, London and the recruitment of ten new members of staff. The latest growth figures, 'though far outstripping the market, follow even higher rates of 17% in 2013-14 and 13% in 2014-15.

Cliffe (pictured, 2nd right with management team Handford, Morris, Horsfield & Shaw) comments: 'Our ambition has always been to develop a business founded on sound advice, led by principals with specialist sector knowledge. It's a model that's proving effective, as we bring on board new clients, whilst developing existing ones'.